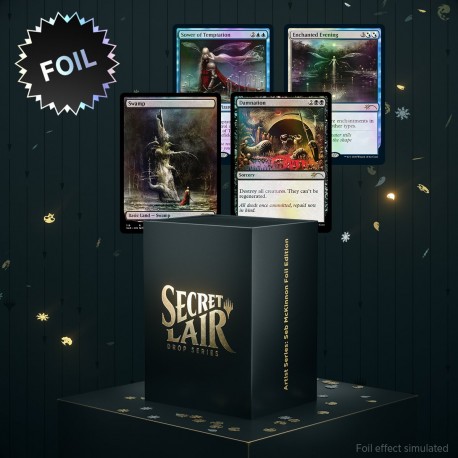 Welcome to the first of (hopefully many!) Secret Lair's Artist Series drops where we let some of Magic's greatest artists run wild.

This time, we worked with Seb McKinnon to select four cards on which he wanted to leave his mark.

We then got out of his way and let him illustrate them however he wanted.

After a month of radio silence, Seb emerged from the woods near Wizards HQ—clothing ragged, hair immaculate—and handed us four unbelievable pieces of art.

The pieces tell the story of a knight's chance encounter with a faerie, and they are accompanied by a poem written by Seb's brother Liam McKinnon.

Don't mind us, we're just going to stare at that Damnation art for a little while longer...

2 other products in the same category: